A Proud Day For Jamie Carragher & The 23 Foundation 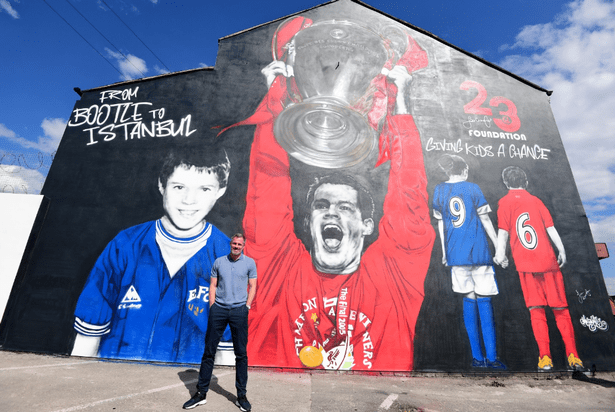 A MurWalls mural celebrating Jamie Carragher and the 23 Foundation was released this week and we think it is incredible.

The mural on Marsh Lane in Bootle is a ‘thank you’ to Carra and the 23 Foundation for their hard work over the past decade that has resulted in over £3 million being donated to causes in Merseyside, across the UK and even to people worldwide in some occasions.

The work of art includes a shot of Carragher as a young Everton fan alongside one of the defining images of a storied career at Anfield, lifting the Champions League trophy in 2005.

The mural also pays tribute the 96 with the striking image of the two mascots in Everton and Liverpool kits taken back in 2012 at Goodison Park.

The legendary former centre-back, who played 737 times for Liverpool, signed the mural to put the finishing touch to a MurWalls piece that took around 30 hours to complete.

Carra said of the mural … “It’s big, it’s bold and we’ve got the colours of both teams in the city on it, so it’ll keep more than half of them happy! There’s a big Everton community here as well as Liverpool, so it’s one of those ones that will hopefully keep everyone happy.

This is a big thank you to the 23 Foundation for all of the work they have done over the past 10 years or so, but more specifically in the last 12 to 18 months throughout the pandemic.

It’s been tough for people around here. Bootle is a really tough upbringing for anyone, I wouldn’t change it for the world, I was exactly the same, but it’s not easy for families and kids especially.

It’s great to see all the kids out here in their kits this afternoon and we try and help them as much as we possibly can, certainly around here and in other parts of Merseyside, but if we can do something in Bootle that’s what we like to do.

That’s what we’ve done and as I say it’s a big thank you, not to myself, but every one at the 23 Foundation.

I go back to being from here, it’s a great place to grow up in, Bootle, I love it to bits. So it is only right that the mural is here and hopefully it can inspire other young people as well.

But as I say, I am very lucky and this is a very proud day for me and my family as well. So it’s a big thank you to everyone.

You can always do more, but as I keep stressing, it’s a team effort, there are a lot of people involved and you couldn’t run a charity or a foundation with just one person.

It’s a huge team and I think we all deserve a pat on the back for what we’ve tried to do, certainly over the last 12 to 18 months when it has been tough for everyone.”

This is the work of a team, it’s not about myself, I’m the figurehead of the 23 Foundation but this is for the work that a lot of people have done.”

In the last 18 months the 23 Foundation have provided over 10,000 meals for families in Merseyside, and have supported local schools with tablets and equipment to help with learning during this tough period in time.

Donating to grass roots football, supplying defibrillators and donating money to Alder Hey hospital and even a new 4G pitch for the community are just some of the great work that the money from the 23 Foundation has been used for, as well and helping thousands of individuals and charities.

What a fitting way for the community to show their appreciation to Carra as a person and the 23 Foundation as a charity … and we are delighted and thankful.

Thank you MurWalls and the Merseyside communities …. your support is truly appreciated.