Born in Bootle, Merseyside, and started playing football at the age of 3.  By the time Jamie was 7, his parents had to tell a ‘ white lie’ and say he was 8 so he could start playing for Sunday league team Merton Villa in Bootle and Litherlands District League where he played for 7 years, before being selected to play for Sefton Borough. Jamie’s talent was spotted and he attended the FA’s school of excellence in Lilleshall at the age of 14.

Although a childhood Everton supporter, he joined Liverpool’s School Of Excellence in 1988. Jamie spent a year at the Everton School of Excellence at the age of 11, but returned to Liverpool due to the club’s superior coaching set-up under Steve Heighway.

At the age of 16 he signed a YTS contract at Liverpool FC. He failed to impress in his first appearances to the Liverpool A and B teams due to his then-small stature, but after being moved from up front to a midfield role he was able to establish himself in the reserve team. 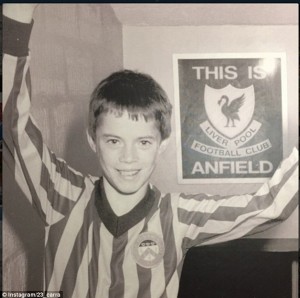 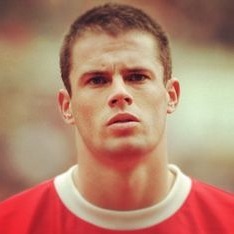 He played his first game for the reserves in the 1994–95 season, and was named man of the match against Blackburn Rovers at Haig Avenue.

He helped Liverpool to win the 1996 FA Youth Cup with a 4–1 aggregate victory over a West Ham United side that included Rio Ferdinand and Frank Lampard.

Jamie was tried out in defence for the first time during the tournament, and later admitted that Liverpool were not the most technically gifted side in the competition, but instead relied on team spirit and the outstanding talents of Michael Owen.

Jamie signed his professional contract with Liverpool in October 1996 and then made his first team début three months later in the second leg of the Coca Cola Cup semi-final against Middlesbrough, coming on as a substitute for Rob Jones. His Premiership debut, again coming on a substitute, against West Ham. He then started the next game against Aston Villa and marked the occasion with his first goal, scored in front of the Kop.

By the following season Carragher was a regular in the first-team squad and by the 1998–99 campaign was considered a player of real promise – which led to his first full English international cap towards the end of the season.

Throughout his early years he was essentially used as a utility player, spending time as a centre-half, right and left full-back and defensive midfield. Because of this he would be deployed to fill in wherever there was a hole, ultimately harming his ability to hold down a first team position of his own. In 1999–00 he played mainly as a right-back, then in 2000–2001 he made the left-back position his own. By this time Carragher had become a firm fans’ favourite for his passion, determination, and “no-nonsense” style of defending. 2001 was a great season for LFC and Carragher, when he won his first senior trophies: the FA Cup, UEFA Cup, League Cup, Community Shield and European Super Cup, in that treble winning year.

From 2002 till 2004 Carragher was hit by two serious injuries, firstly missing the 2002 FIFA World Cup for an operation on his troublesome knee and later due to a broken leg in the first half of the 2003-04 season due to a tackle by Blackburn’s Lucas Neill at Ewood Park in the Reds’ fifth game of the season. During this period, Carragher’s place in the team was also threatened by signings of Steve Finnan and John Arne Riise. However, he succeeded in retaining his place in the team, making 24 appearances in the first half of 2004. 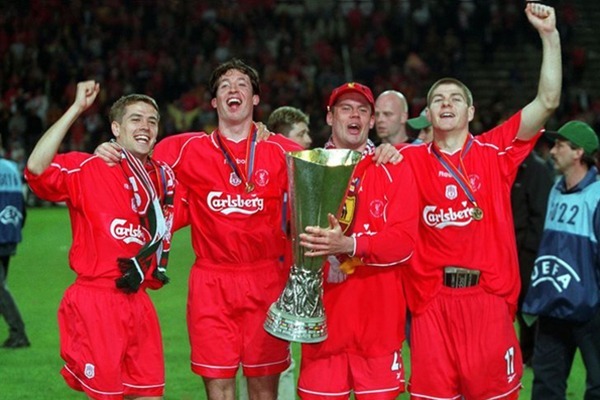 The 2004–05 season was a career defining one for Carragher. New manager Rafael Benítez moved him to centre-half where he managed 56 appearances alongside Sami Hyypiä, forming what became one of the best central defensive partnerships in Europe. Carragher finally shrugged off the utility tag and established himself as a centre half. Carragher developed a reputation as a strong and positionally astute defender. His partnership with Hyppia was key in Liverpool’s 2004-2005 incredible Champions League victory in Istanbul. One of the most memorable moments of the match was when Carragher made two vital last ditch intercept into extra time whilst suffering with cramp. Carragher was voted as Liverpool’s player of the year at the end of the campaign. He later went on to captain in the team in their 2005 UEFA Super Cup victory when Liverpool won against CSKA Moscow in Monte Carlo.

On May 13, 2006, Carragher played in the FA Cup final against West Ham. It was his tenth final in ten years of club football. In the 21st minute, Carragher rolled the ball into his own net after a strong cross from the Hammers’ full-back Lionel Scaloni got caught under his own feet. Despite this Liverpool went on to win 3–1 on penalties after the match finished 3–3 after extra-time, with Gerrard scoring that memorable equaliser in the final seconds of the game.

On December 9, 2006, Carragher scored his first league goal since January 1999, in a match against Fulham at Anfield. His central defence partner Agger flicked the ball on from a corner, and Carragher slid the ball under Fulham keeper Jan Lastuvka at the far post, sparking wild scenes of celebration that displayed the Kop’s admiration for the player. The goal was only his fifth in his Liverpool career.
In Liverpool’s Champions League semi-final second leg against Chelsea on May 1, 2007, Carragher set a record for the most appearances in European competition for the club. His 90th European match took him past Ian Callaghan’s 89 matches between 1964 and 1978. After this match he was also named Man of the Match for his outstanding display despite suffering with cramp. Carragher was voted as Liverpool’s Player of the Year for the 2006-07 season by the fans and soon after extended his contract till 2011. That season also saw Carragher’s controversial international retirement, with the defender citing frustration with a lack of appearances under Steve McLaren.

The 2008 season saw Carragher reach his 500th appearance for Liverpool, in a season in which he continued to be a first choice defender for the club.

The 2007–08 season saw Carragher reach his 500th appearance for Liverpool, for which he was made captain. On 18 May 2009, in the match against West Bromwich Albion, The following season saw many questioning his performances and whether he should remain in the starting line-up, although a solid performance against Manchester United on 25 October 2009 silenced his critics. Four days later, he was sent off in a game against Fulham, which was his first red card in more than seven years.
On 4 September 2010, a mixture of Liverpool players past and present played an Everton XI in Carragher’s charity fund-raising testimonial match.[34] All proceeds from the game at Anfield went to local charities through Carragher’s 23 Foundation. He scored a goal for each side as his Liverpool team beat Everton XI 4–1, first by scoring from the spot for the Reds before converting a penalty own goal for the club he had supported as a boy after the break. 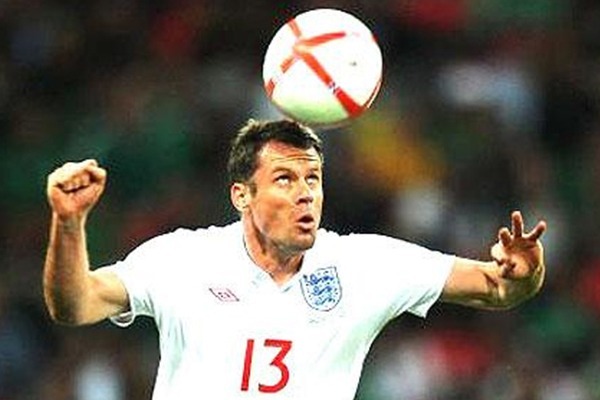 On 24 October 2010, Carragher scored his seventh own goal in the Premier League. Only Richard Dunne, with ten, has scored more. Weeks later, Carragher dislocated his shoulder in a 2–1 defeat to Tottenham Hotspur, the same game being his 450th Premier League appearance for Liverpool. He was out for around three months with the injury as it required surgery. He returned on 6 February 2011 against Chelsea.

In the first game of the 2012–13 season, and the start of Brendan Rodgers’ term as Liverpool manager, Carragher made his 700th appearance for Liverpool in a 1–0 victory in the Europa League third round qualifying tie against FC Gomel.[40]Carragher often captained the side during the Europa League, and after a period of time only making league appearances as a substitute, he began to again earn a string of starting places.

On 7 February 2013, Carragher announced that he would be retiring at the end of the season, stating “It has been a privilege and honour to represent this great club for as long as I have and I am immensely proud to have done so since I was 9. On 9 March 2013, played his 500th league game for Liverpool, in a 3–2 win over Tottenham Hotspur. On 19 May 2013, Carragher played his 737th and final game for Liverpool in a 1–0 win over Queens Park Rangers. Before the match, he was given a guard of honour and was presented with a special trophy commemorating his career by Steven Gerrard and Ian Callaghan. During the match, despite his sparse goal record, Carragher hit Robert Green’s post with a 30-yard strike, before being substituted in the 87th minute to a standing ovation from both sets of fans and players.

Internationally, Carragher held the national record for most caps at under-21 level and earned his senior cap in 1999. He represented England at the 2004 European Championship and the 2006 FIFA World Cup, before announcing his retirement from international football in 2007. He did, however, temporarily come out of retirement in order to represent England at the 2010 FIFA World Cup, before retiring again with 38 senior England caps.

Jamie work with the 23 Foundation keeps him busy, attending events, promoting the charity and doing whatever he needs to help develop it further.

Jamie is also a popular figure on our TV screens, working at a pundit for Sky Sports. His relationship and ongoing banter with Gary Neville is entertaining to watch and his straight talking punditry leaves viewers knowing exactly what Jamie’s views are. Jamie also works as a occasional sports columnist for the Daily Mail sharing his views on whats happening in the world of football.
In between other work engagements, non 23 Foundation charity work and spending time with his wife and children Jamies ‘after football’ career is as busy as it ever was! 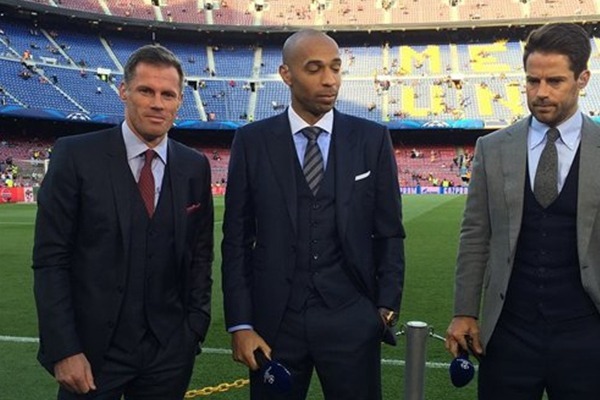