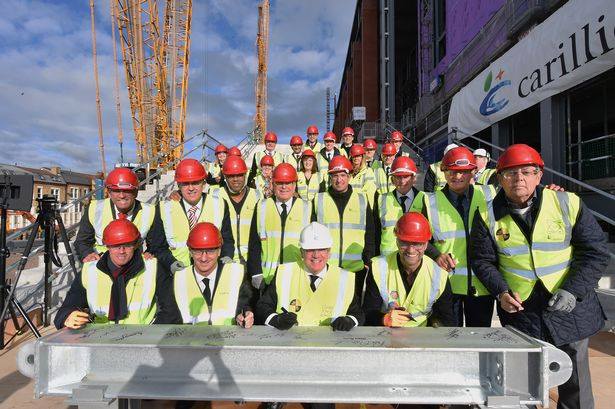 Jurgen Klopp, Kennny Dalglish, Jamie Carragher and Ian Rush were among the guests as Liverpool held a ‘Topping Out’ ceremony to mark the new Main Stand reaching its maximum height.

Topping out is used to bring good luck on a new building and 10 Liverpool legends were among those invited along to mark the occasion. The expanded Main Stand is now more than double the height of the existing stand a year after construction work started.

Construction workers were thrilled as they were also joined by Reds heroes including Robbie Fowler, Gary McAllister, John Barnes, Ian St John, Phil Neal, Alan Kennedy, Ian Callaghan and Roger Hunt. When completed the Main Stand will be home to an an additional 8,500 fans and new hospitality facilities, taking Anfield capacity to almost 54,000.
The signed steel girder for Topping Out Ceremony for the new main stand at Anfield on February 11, 2016 in Liverpool, England. Alongside Liverpool chief executive Ian Ayre the guests signed a piece of structural steel, which will later be lifted and secured into the Main Stand’s new roof, which has been designed to project the noise from fans down onto the pitch.
Ayre said: “We have today reached another important milestone in this fantastic project. We are absolutely delighted with the progress and are looking forward to having even more fans supporting the team at Anfield when the Main Stand opens next season. The expansion provides us with the opportunity to ensure that the rich history and traditions that make this stadium so special can continue for many years to come – none of which would have been possible without the incredible support we’ve received from our fans, partners, sponsors and the local community.”

The construction work is being carried out by a long standing LFC partner in Carillion, who have worked on all four current Anfield stands. Carillion director Mark Nicholson, said: “We are delighted to have reached another milestone in the progress of the Main Stand extension. This project to create new world-class facilities at Anfield has also benefited local businesses and people through opportunities of work and training through apprenticeships.”

The legends toured the Main Stand which is due for completion later this year, comprising three tiers with a widened player tunnel, new team benches, a media platform and wheelchair viewing positions. 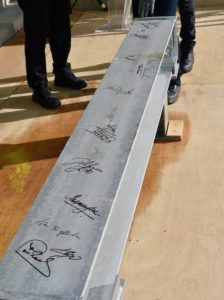