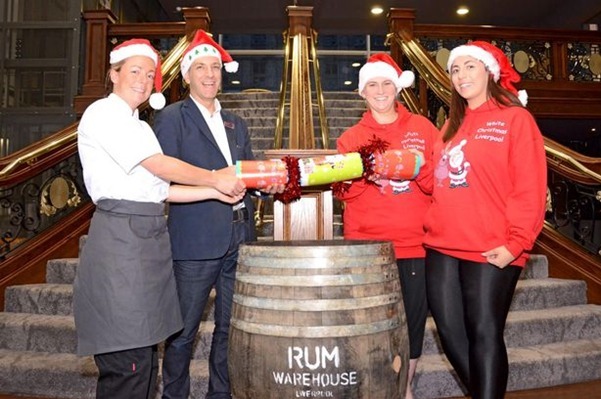 White Christmas Liverpool offers a meal and entertainment to 250 elderly people who would otherwise spend the day alone.

The Titanic Hotel has come to the rescue of lonely pensioners on Christmas Day by providing a venue for an annual charity event which was at risk of being cancelled.

White Christmas Liverpool, held in the Town Hall for the past two years, offers a hot meal and entertainment to 250 elderly people who would otherwise be spending Christmas Day alone.

But last month it was announced that the event was at risk of being pulled due to a lack of funding, and organisers put out an urgent appeal for support and a venue.

Liverpool’s Titanic Hotel announced that the event will be hosted in its Rum Warehouse venue on Stanley Dock.

Ian Gray, general manager at Titanic Hotel, said: “When we heard that White Christmas needed to find an alternative venue in order to go ahead, we were more than happy to step in and offer the Rum Warehouse space.

“The initiative is valued by so many people across the city, and supported by such a fantastic team of volunteers, we knew we had to help them make it happen.”

Supported by former Liverpool FC star Jamie Carragher’s 23 Foundation, the event will provide transport to and from the venue, a three-course meal cooked and served by a team of dedicated volunteers, entertainment and a small gift for each guest.

Clare Johnson, project manager of White Christmas Liverpool, said: “We were at serious risk of cancelling due to lack of funding this year so we put out an urgent appeal for the people of Liverpool to come forward and help us.

“We were thrilled to be contacted by Jamie Carragher’s 23 Foundation, as well as individuals and organisations all offering their support.”

Herbert said: “I am excited and delighted that Queenie’s Christmas will be joining White Christmas Liverpool for this special festive event on Christmas Day 2015.”

White Christmas Liverpool is a not-for-profit event and is run solely by volunteers who give their time to ensure people don’t have to spend the day alone.

Councillor Gerard Woodhouse, mayoral lead for older people at Liverpool Council, said: “Isolation is a huge problem for older and vulnerable people and we know that too many are lonely at Christmas time.

“I am glad we are in a position to support excellent initiatives like White Christmas, giving people much needed comfort and support, alongside all the other activities happening at this time of year.”

With 250 places available, the event’s organisers are asking those who would like to attend to download the registration coupon and return it to: White Christmas Liverpool, C/O Cllr Gerard Woodhouse, Liverpool City Council, Cunard Building, Water Street, Liverpool, L3 1DS