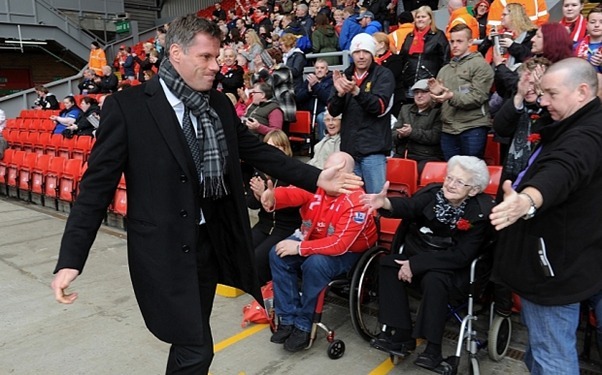 Jamie Carragher won FA Cups, League Cups, the Uefa Cup and Champions League in a stellar career with Liverpool and added another remarkable honour on Tuesday evening when he collected a Beacon Award for philanthropy for his community work on Merseyside.

Carragher joined other philanthropists, including Lord and Lady Harris, Sir Peter Lampl, Sir Peter Vardy and Lady Margaret Vardy, and the former Watford chairman, Jack Petchey, at the event in London where he and the other recipients were described as “exceptional people who have given their time, expertise and financial resources to help people and communities prosper in difficult times”.

The former Liverpool and England centre-half used funds from his testimonial to establish the 23 Foundation Soccer School, providing coaching in eight schools in deprived areas of Merseyside. Carragher’s 23 Foundation also gives grants to young people in local communities to help them pursue their dreams.

“I hope that I can give youngsters a lift and that extra push to realise their goals,’’ said Carragher. “Liverpool is a place that likes to see its own do well. It is a tight-knit community and growing up I got a lot of help and encouragement from people around me.

“I’m from an under-privileged area – Bootle in Liverpool. If I ever got the chance to help that area and the wider community I’ve always felt I would. There are plenty of philanthropists around the world who do great work and I am one of the many trying to do my little bit that will hopefully help people in my area.

“It’s a great feeling to be able to help people who aren’t as fortunate as yourself. I think you have a duty to help others as you or your family or friends may need help from someone in the future.

“Philanthropy has always been important but more so now with the cuts the Government are imposing and it looks like there may be more to come. So it’s important we do as much as we can.”

Carragher was presented with the award by the PFA and David Sheepshanks, the former joint acting chairman of the FA and now chairman of UK Community Foundations, which supported 21,000 local community causes all over the UK last year with £65m in grants.

“I think what Jamie Carragher has done in setting up this £1m fund with his local Community Foundation to help people in the communities where he grew up is both amazing and humbling,” said Sheepshanks. “He is a true role model who is inspiring less fortunate young men and women to aspire, to dream and to achieve.”

Now a respected pundit since retiring from football, Carragher has also set up a partnership between UK Community Foundations and the PFA to provide advice to players considering similar charitable work.