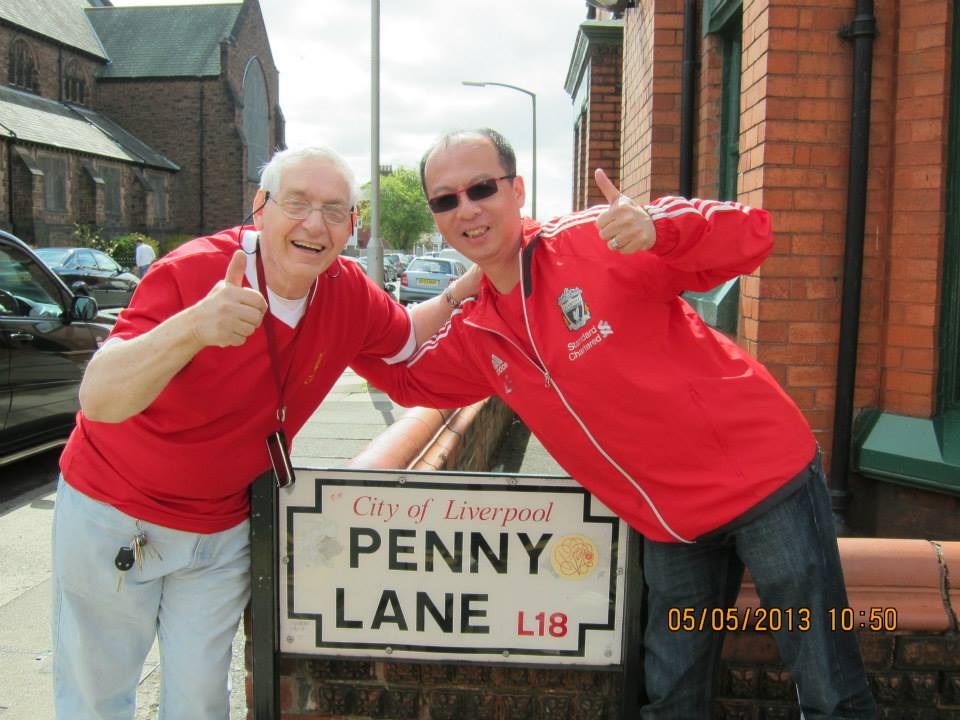 When we asked for guest bloggers to write for us here at the 23 Foundation we were naturally a little wary about what we would receive in our inbox. A week or two ago this arrived in our inbox and what a lovely read it proves to be …. whilst showing us all that Liverpool FC are ‘a special club with special fans’

Thank you to Luqman Guee from Singapore for this great guest blog, and with our further ado here it is ……

6,821 miles, that’s the distance between Liverpool and my homeland known as Singapore however it didn’t stop me from supporting our Reds since 1977. In May 2013, I’ve decided to make my maiden trip to Liverpool, travelling alone to fulfill my dream was so excited and yet felt some worrying as I was travelling alone until I came to know Micheal Hinden.

Just imagine Michael age 75, a season ticket holder for more than half a century, have attended 4 out of 5 winning Champion League Cup finals and known as “Mr Liverpool” living in Childwall, an affluent suburb of Merseyside. He provide after match reports through his emails and have a respected following of more than 600 followers worldwide. We have been communicating thru emails, phone calls before the actual trip and I’ve instantly felt his warmest, caring as a great fatherly figure. When we finally met, my feelings for him was reaffirmed, we both enjoyed each other’s company during my 10 days stay at his place. Each day, I had my own LFC’s related activities, leaving his place as early as 9am and be back as late as 3am. I still remembered his words, “Usually friends stay at his place at most 4 days and I was the only one who did it for 10 days. Judging from who I’ve met in Liverpool, he would take atleast 10 years to do so but I did it in 10 days”. I’m heavily blushed in hearing it. He conduct his own local tours, that includes driving us to front of the players’s home and describe to us who stays there. Such a privilege indeed!

In the following year 2014, I’ve stayed another 15 days at his place and I knew Liverpool has become my 2nd home. I’ve set another milestone by attending Liverpool’s 1st players’ award, met wonderful players including King Kenny and Stevie G. Life was very rosy and sweet until afew months later when I rec’d an email from his son, informing me his father Michael has passed away suddenly on 23rd January 2015. My world has crumpled and crashed badly as a fatherly figure has left me. I wasn’t alone feeling the sadness, alot of them responded and gave their fair sharing of contributions. Some managed to share this sad news at our LFC website, which can be read HERE.

I always take the Mersey Ferries twice(beginning and last day) during each stays however when I came to know Michael’s ashes has been dispersed into the Mersey river, I knew I’m going to have mixed feelings for my next Mersey Ferries ride. Michael’s son knew how close we were, asked whether do I want anything from his dad’s belongings. I knew Michael loves to read LFC related books, his favourite is Carragher’s book which he read many times. It came to a surprised I’ve rec’d two large boxes of memorabilias that includes Carragher’s book and his favourite Liverpool Champion League’s cap which he wears it on match day at Anfield.

As I’m typing this sharing with a heavy heart, my sadness drove down and I really miss my fatherly figure, the late Michael Hinden! I know I may not see you anymore, I can still feel your presence especially right now as I will be wearing your cap to attend any matches. You’ll certinaly Never Walk Alone my friend……we will meet up one day!

Pictured is Luqman with the late Michael Hindman.

Please note the above text hasn’t been edited at all because we appreciate that this is a story written from the heart ….